Last month I spent some time with transport professionals in Paris at COP21 for Transport Day.  Here are my thoughts on the event and the way forward.

Transport already accounts for a quarter of global energy-related greenhouse gas (GHG) emissions and is the fastest growing consumer of fossil fuels worldwide.  Much of this growth is expected in developing countries where emissions from transport have nearly tripled in the past couple of decades.

However, sustainable transport is not narrowly about GHG emissions, but also about a host of additional factors related to quality of life and development in cities, such as access to markets and activities, road safety, congestion and pollution.

Focusing narrowly on GHGs misses the underlying reasons resulting in GHGs, such as unsustainable land-use patterns.  In other words, GHGs are a symptom, not the disease.  That’s why the goal of sustainable transport policies should be to improve quality of life through better urban design, which will automatically result in lower GHGs.

How can this be achieved?

Achieving sustainable transport systems requires an approach widely known as the “Avoid – Shift – Improve” (ASI), beginning by avoiding the need to travel (by car), shifting travel to more cleaner modes, and improving the energy efficiency of the current transport systems. Below are key examples of potential initiatives that can accelerate the transition to sustainable transport.

Source: Adapted from Investing in Sustainable Transport and Urban Systems – The GEF Experience

All of the attention on “shift” policies was on expensive rail projects, with limited focus on Bus Rapid Transit (BRT) and non-motorized transport.   Some lip service was paid to the need to shift to walking and cycling, but there was no fundamental appreciation for the way cycling is often the most efficient urban transport mode for trips of less than 5 kms, and the need to promote this cost-effective transport solution in developing countries. 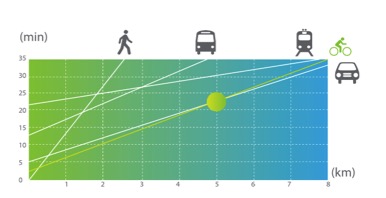 Source: Cities for Bicycles, Cities for the Future, European Commission

Most of the attention was on electro-mobility, which undoubtedly must play a role in the transition to sustainable transport, though it shouldn’t be the key focus especially in developing countries that must carefully consider how to spend limited transport budgets.

It’s important that UNFCCC starts addressing emissions from transport, and the way to do this is to take a holistic approach to building sustainable transport systems.  This will imply less  CO2 accounting per se, and more emphasis on creating low-carbon transportation alternatives as the back-bone of vibrant and livable cities.

A city worth living in is safe for children to bike to school, and for seniors to walk around without fear of being driven over by cars.  These cities have strong neighbourhoods built on convivial and attractive streets – that are not just places for car movement, but that enable social interaction and exchange.  These are also the cities where emissions from transport decrease as a side effect of building cities for people.

How this relates to Amsterdam

Amsterdam in specific and Dutch cities in general offer a model for how to link land-use and transport planning to achieve this sort of livable city.  In 2015, Sustainable Amsterdam started a Livable Cities Campaign to explain how Amsterdam achieved its transformation to a livable city, and to inspire other cities to adopt similar approaches.  This campaign illustrates that achieving sustainable and livable cities is not about counting tons of CO2 but rather about redesigning our cities in a way that people can live healthier, happier lives.  Isn’t this what UNFCCC should set out to do?

As European leaders gather in Amsterdam for the first six months of 2016 to lay out an Urban Agenda, Sustainable Amsterdam will continue to contribute to the discussion of the future of inclusive, sustainable and creative cities.  We will increase our emphasis on exporting Amsterdam and Dutch approaches to sustainable mobility by continuing to show what it means to build livable cities and how this transformation can be achieved in other cities.